It's been a month since I posted any sketches or art?! Good god. It's not that I've been lazy, except in posting. Here's some pages from my sketchbook. Sorry about the quality of some of the photos - I have to use a digital camera and the light has been pretty variable today. 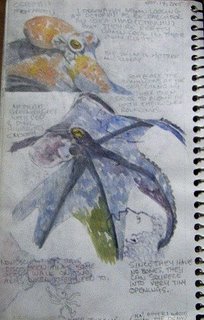 (right upper corner)
I originally began looking at octopi(i?) as research for an idea I had (Cthulhu) but they're pretty damn cool in their own right.

The skin is mottled and "lumpy."

Some are the "chameleons of the sea," changing their own color to blend in with their surroundings.

(lower left corner...and yes, that is the chicken from the movie Chicken Run you see through the paper.)
Now scientists have discovered that some octopi walk on two arms when they need to.

(lower right corner)
Since they have no bones, they can squeeze into very tiny openings.

(bottom, nest to walking octopus)
keep truckin'...(Ha! After I wrote that, the Dead's "Truckin'" came on the radio.) 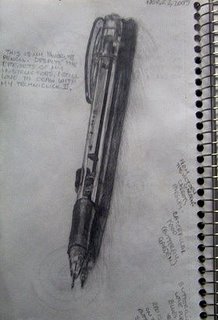 (Left side text)
This is my favorite pencil. Despite the efforts of my instructors, I still love to draw with my Techniclick II.

On the right side are notes I made while I was listening to the Victory Garden. I listen to the TV or radio quite a bit as I work - it distracts my brain so it can't nitpick what my hand is drawing. The notes say: From the Victory Garden: carrots, parsley - caterpillar food (butterfly garden.) Butterflies love purples, blues, yellow. Red is low on the butterfly scale. 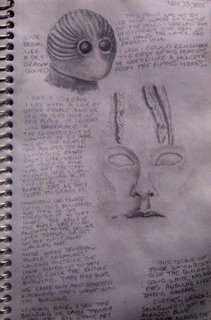 (Upper right)
This fella was hit by ice cold water at the top of the hill - I 'rescued' him by offering the heat of my hand. The water had frozen him.

I wish I could remember the rest of his features. He looked like a monster from the fifties' movies.

(Left side)
I had a dream. I was with a lot of other people and we had to get out of this place. It looked like some place in the country but we wanted to go home. One of the people had access to an expensive (and fast) car - which we tried to pile into but the car turned into a small rectangular pallet. I held on to the black cat as they tried to start it.

Somehow, we ended up in this building - we had to go through it to get home. The halls of the place was filled halfway to the ceiling with trash. We got on top of I and walked out.

There were several people? creatures? outside the door, lined up so they could cover the entire building. They had guns. We came out and started running - they went into the building.

Looking back, I see the building we came through was the Vol State Art building.

(lower right corner)
This is one of those waiting outside the building. solid white; no "real" eyes, angular like Darryl Hannah.

Clothes, weapons, skins were white - almost blue. The area across the eyes was flat - plastic covering it.

Well, now you've had a ridiculously close look at the inside of my head. Are you scared yet?
Posted by Azra at 2:55 PM