Residents of upper Sumner County had a mystery on their hands last Wednesday morning. A strange symbol appeared in a slightly overgrown grass pasture, resembling what is popularly known as a crop circle.

Word about the circle got out early, with people parking along the road to see it. Since the pasture was on a slight incline, many stood on the roofs of their cars in order to get a better look. Local authorities were contacted after the crowd began to get out of control late in morning and several people ignored the posted no trespassing signs. They tramped across the field to get a closer look.

By Wednesday afternoon, speculation was running rampant in this community. "Aw. ain't no mystery to that thing at all," said local resident Ira Smith. "It's just some damn kids playing a prank, that's all." Another resident, Vera Green, didn't know what to think. "It's just strange, isn't it? It just appeared overnight. Nothing like that's ever happened here before." 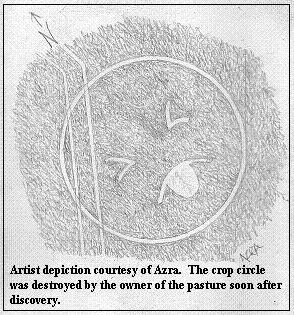 Unfortunately, the crop circle was destroyed before researchers could arrive to study it. The owner of the field, who did not want to be identified, mowed the field after the crowd of onlookers began trampling the grass and littering. Terry Onsmore, of the Sumner County chapter UFOrce, was allowed to enter the field after the field was mowed to take as many readings and samples as possible. While the results of the soil and plant samples will not be available for several weeks, magnetic readings taken at the site were promising.

"There were several places in the field where the needle nearly went off the scale," said Terry. "I came into this project convinced it was a complete hoax, not I'm not so sure. Readings of this kind are extremely hard to fake. What the heck happened out here?"

No one seems to know the answer to that question. There were apparently no strange sounds or lights the night before. This was verified by Azra, who lives across from the field. "I was working on a deadline," she said. "So I was up nearly all night to finish. I went out several times to take a break and look at the night sky. I didn't see or hear anything out of the ordinary. Makes you wonder, doesn't it?"

Crop circles are relatively rare in the United States. They are most often seen in Great Britain and depicting fanciful designs. Many who study crop circles believe the crop circles contain messages vital to the human race, although there is no credible evidence of that message being understood at this time.
Posted by Azra at 12:26 AM

Labels: fake news articles, Oh that Joannie, things I totally made up, writing