Firefighters and Emergency Rescue were called to a residence outside of Portland today.  What they found when they arrived was unexpected and put several of the respondents lives in danger, as well as the surrounding neighborhood. 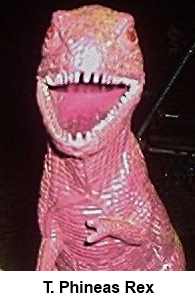 T. Phineas Rex, of Portland, had been drinking when he fell off the table he had been using as a sundeck.  Mr. Rex fell two feet, injuring his left arm.  When Emergency rescue arrived, Mr. Rex was in a drunken rage, yelling "It's the extinction all over again, man!"  He then proceeded to lunge at EMTs and firefighters while claiming they were "out to get him."  During the melee, Mr. Rex snapped his teeth and swiped his tail at those present, knocking down one EMT and ripping the coat of a firefighter.

Mr. Rex then entered a neighbor's yard where he proceeded to climb onto a dog and ride it as it ran, frightened, around the neighborhood.  After several minutes, Mr. Rex fell off the dog and passed out in a nearby yard.

One of Mr. Rex's neighbors, who would only identify herself as Azra, witnessed the episode.  All she would say about the incident was, "Been hitting the cider again, has he?"

Mr. Rex is now resting at home.  No one was injured but charges of Public Intoxication and Endangerment are pending.

Posted by Azra at 8:33 PM No comments: Links to this post