I thought about joining the Sketchbook
Project at the Arthouse Co-op this year. It sounds like a great thing - fill up a Moleskin sketchbook and it goes on tour before being permanently housed in an Art Library in Brooklyn. It gets its own barcode and has the option of being digitized and put online. You can even get an email everytime someone looks at it.

The more I thought about it, though, I decided I may not finish it. They're charging $25 for the sketchbook. I'd probably start thinking it was too "good" to just sketch in or even to mess up. So I decided to try it on my own, with a blank book I already had. It won't go on tour anywhere, unless I carry it in my backpack and the only library it will see is the the room where I keep most of my books but that's okay. This way, the sketches can be good, bad or whatever and I can just go crazier crazy.

I'll admit it - I stole the theme I was going to use if I signed up.

So, here's the first entry. Click on it to embiggen. I ended up changing the conversation between the two pterodactyls on the branch. The first one made no sense whosoever. I'm not saying it's great art or anything but it made me laugh. 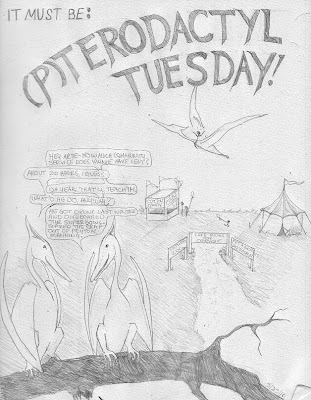