While I was out by the studio today, I startled something in the grass. It got Mishy's attention but neither of us got a look at it.

I wonder how it would be reported, if cats had their own newspaper?

Something tasty is apparently lurking in the woods outside a local barn but as of yet, no feline has been able to get a glimpse of it. Apparently, before today, the only clues that there was something edible in these woods was an occasional rustling sound on the ground, as if the tidbit were looking for food itself. That changed when the first clue as to what the tidbit may be was gathered: a loud but short, piping squeak. 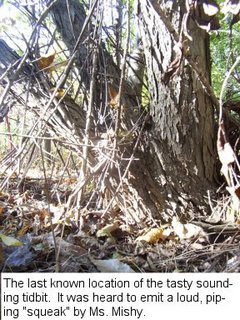 "It sounded somewhat like a mouse," said Mishy, a black and white resident of the property where the possible appetizer was heard. "A large...tasty...absolutely sumptuous mouse...uh, ahem. I never saw it though. It disappeared before I got close to it at all."

"Of course, I didn't believe it at first," said another feline in residence who refused to give his name. "We've all heard stories of the tidbit in the leaves that was more delicious than could be imagined but those are just stories told to kittens. Myths - like the place all cats go where food is everywhere, we can mate all we want and humans are our playthings. Now I just don't know what to think."

Experts who have examined the case so far have determined that the tasty tidbit was definitely not a mouse. "Judging by the amount of noise the tidbit made, according to Ms. Mishy's report, it was quite a bit larger than an ordinary mouse. It could have been a ground squirrel or a chipmunk. Of course, we won't know for sure until we have more evidence."

Keep reading the Feline Times for the latest news on the discovery of this possibly tasty new morsel.
Posted by Azra at 3:50 PM