There are a few paintings that have given me absolute fits lately. Here’s the 4’x2’ King of the Fits: 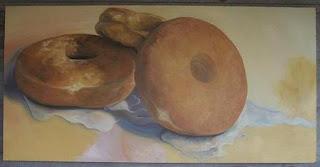 I don’t know exactly why this thing is giving me such fits. I like the corner those two donuts are in on the left. I also like the pool of glaze on the right. Excuse that big blob of ochre on the right and that thing in the bottom center – I was trying to get something going.

Those were some great donuts though.

Another painting that gave me fits is Instant Ancestor#1: 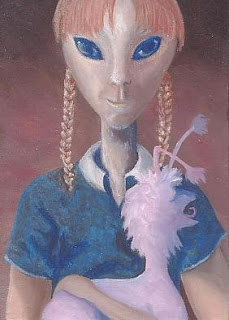 I think I’ve got what I need to finish it now. Part of my problem with this painting was its cuteness. It’s almost too cute. So yesterday, while I was raking leaves for the garden, part of her story came to me.

“Her ‘pet’ (it can’t be pronounced by our tongue) is the reigning Grand Champion as well as currently standing at number one in its class. He has killed 243 of its competitors, surpassing his Grand Champion dam, who could only claim 130.”

Now, this isn’t at all like dog fighting. Nope, not at all. It is more like Westminster...well, okay – Westmonster. She’s so proud, isn’t she?

(Which reminds me: I should clean the story off the front door where I wrote it on the glass with a china pencil, although it would be interesting to see the faces of people who come up…)

Here are a few more ideas for Instant Ancestors: 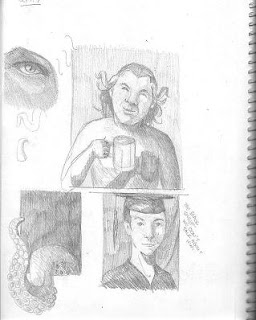 Yes, beside the “normal” guy, it says “The black sheep – we don’t talk about him.”

I played with the anatomy of this satyr (well, that sounds wrong.) I like the idea of the horns and the tail but it makes more sense to me to use the front legs of a goat. They are a little more analogous to the legs of a human. I don’t know but I like this guy.

Here’s a doodle of Bast on part of a 3”x5” card. I keep trying to end our little cat fight. 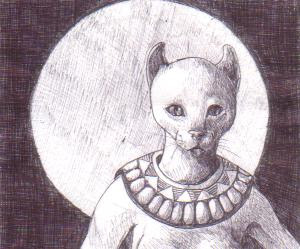 I couldn’t pass this one up. I don’t know exactly how I’m going to use it but what imagery. You should be able to read it by clicking on the picture. 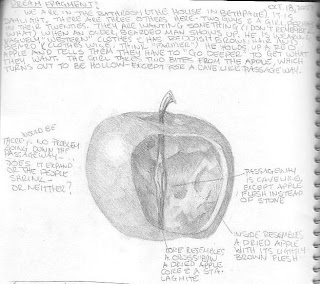 …and one more. I read a story a while back that had a crow who just happened to also be a parson. I’m still playing with it but here are a few things so far: 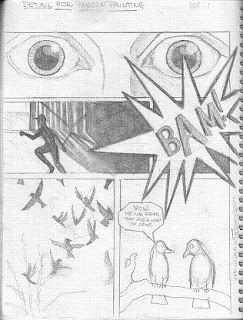 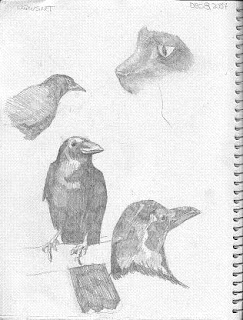 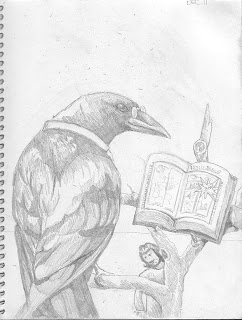 Yes, that is a comic book. You can’t expect a Trickster like Crow to actually pay attention during a ceremony, can you? I don’t know about the girl yet. I think I’ll work on her a bit – or get rid of her entirely. Who knows?
Posted by Azra at 3:07 PM 1 comment: Links to this post

Labels: art, Crows as parsons, dream imagery, ideas that don’t want to work, ideas that might work, painting, we may just end that cat fight yet, Westmonster champions

I’ve been playing with the idea of changing the name of my studio. I’ve been calling it Black Horse Studio in my head since I was in my teens. Yes, there were reasons behind it but I won’t bore you with them. Let’s just say the name has done its job and I want to retire it with honor.

Off on a tangent for a second… there is the #1 Chinese restaurant in Gallatin (yep, that’s its name) that has all these neon animals in the window. There’s a cow, chicken, pig and best of all - a shrimp. I love that thing. The Neon Shrimp would be a great name. For what, I don’t know.

Anyway, I’ve been playing. I don’t know if I’ve found quite the right thing yet. Here’s the first idea I had (and favorite): 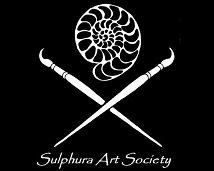 Not too far away, there is a little spot in the road that used to be a thriving little town in the late 1800’s. It had a general store, post office and school. It struck me as ridiculously pompous and fun that I could be, instead of a studio, a one person art society in a town that doesn’t exist anymore except on some maps. Of course, I had to pay homage to Calico Jack, Anne Bonny and Mary Read too. 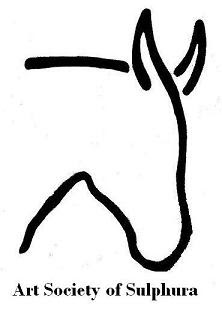 However, after dealing with one particular crazy making person (who also inspired a painting,) I thought it may be better to go with a little burro as a mascot and change the words around a bit. This guy is a little too horse-like but you get the idea. The motto could be “Sometimes, at the end of the day and despite your best efforts, you’re still just an ass.”

Speaking of that painting, here it is: 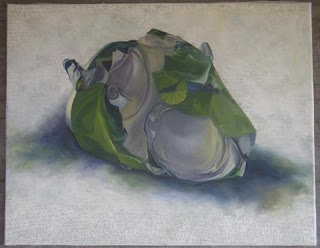 I call this my therapy painting. This was pretty much how I was feeling. I had a brand new wooden pencil when I started writing on the canvas. I covered that sucker and had just a little stub left when I was finished. Don’t believe me? Here it is: 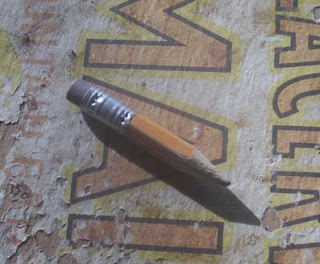 I love the way this painting worked for me. I started out pissed as hell and ended up musing where we would be if someone didn’t have the curiosity to ask “What if we put cheese in a spray can?” and how I could make tens of dollars.
Posted by Azra at 2:47 PM No comments: Links to this post

Hello? Is anybody here? Hello?

:::sigh::: I knew it's been a while since the last post but sheesh....How about we put this in the "another damn thing for Azra to get over" file and continue on? Perhaps the new year should focus on being a little less isolationist and neurotic? Well…isolationist anyway. May as well be realistic.

So, my poor neglected friends – how are you? Doing okay? Putting exes and other enemies to shame by living well? I hope so. I missed you.

There was a bit of time while I was gone that I began to call “Let’s Get Azra Culturfied.” I went to the Tennessee State Pow Wow at Longhunter State Park and the Don Yahola Memorial Pow Wow in Mount Juliet. I almost got to a third pow wow, only about fifteen minutes from my house – only to find it cancelled and the dance grounds covered with new strawberry plants. (Apparently they’ve given up everything “native”- the pow wow, the sweats. Sad thing too – that was one of the best pow wows around.) We ended up going to the Mennonite community and Shaker Museum instead. MMM…..fresh molasses. MMMM…tomato cheese bread.

Oh yeah…and then there was Samhain. I thought it appropriate to spend it with a bunch of mostly dead artists. Free day at the Frist is a wonderful thing. There is also a great little used bookstore across the street in Cummins Station. I could spend days in there.

Well…I’m done boring everyone. Let’s get to some art, hmm?
Posted by Azra at 2:39 PM No comments: Links to this post