It's Tomato Art Fest time again! This year, it was a bit of a struggle to come up with ideas and when I did come up with one, I usually didn't know how in the world to carry it out. I had cityscapes hiding inside of tomatoes and whole universes leaking out of slices, complete with stars, planets and galaxies. Tomato shaped bubbles floating in the air (the background gave me fits on that one.) Hermit crabs and tomato shaped clouds.

Here's what I finally came up with: 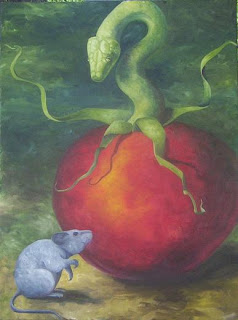 I call this one Medusa. The lady at the gallery said it reminded her of a children's book about a little yellow baby boa constrictor who didn't want to grow up because he didn't want to turn green. She told me the name of the book twice and my ears just didn't have their gloves on for some reason. I never did catch it.

I finally called this one "Oh, Hello!" I worked on this one off and on for six weeks and the composition changed at least three times, maybe four. I felt I went out on a limb with this one because it has an actual background instead of what I usually do. I worked on this painting right up until two days before it was due at the gallery. Even the photos I took of it came out strange.

I told someone that I felt the same way about this painting as I imagine a parent may feel about a kid: you can't help but like them but you just know they're going to end up on the street, possibly in the wrong part of town. 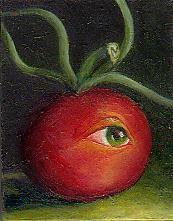 This is Ode to Wazowski. That's about it's real size. I tinkered with this painting after the festival last summer. It was a plain little thing, with its little tomato self. I picked it up again this year and immediately saw it looking out at the world.

Bast has to put up with some real dumbasses...(one of these is a repeat - it's there for continuity.) 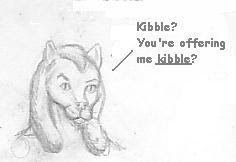 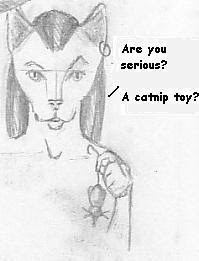 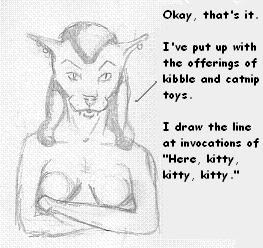 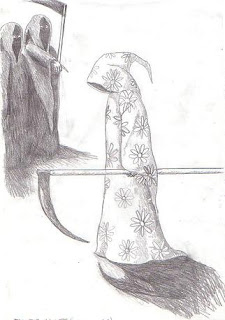 Posted by Azra at 2:57 AM No comments: Links to this post

Why can't more mail be this interesting?
Posted by Azra at 2:53 AM No comments: Links to this post

It's been a while. Is that a dustbunny moving across the floor?

Hey y'all. I've missed you.

Well. What's been going on with you?

What? Oh, the late unpleasantness? It's calmed down, for the most part. I don't know what brought it on. All I know is this: after five days of peace alone, I refused to take the blame for whatever it was. I was told "It takes two to fight." True. That said, it only takes one to go crazy. Since then, there have been a few more instances where I have been called a smartass (and?) as well as rude, hateful and impatient (Hello, Pot!) All I can say is, "Whatever. Blame me for Iraq and Darfur if it makes you feel better. I just don't care anymore."

If I did, I'd never get anything done because I'd be a roiling mass of frustration, hurt and anger. That's a type of craziness I just do not need. If it makes me look rude and hateful, then so be it.

Let's get on with the good craziness, shall we?
Posted by Azra at 2:50 AM 1 comment: Links to this post