Oh good god. Has it really been fourteen days since the last post? What, Azra? You have three paintings, an mixed media and two graphite drawing going but no new art to post? Bad Azra! Bad, bad!

It's hard to imagine now - when I first went back, I was almost terrified of not finishing again. I kept watching for those familiar signs of burnout. It didn't happen. Not only that, I ended up graduating with enough credits for two and a half degrees. Granted, those credits were kind all over the place. Part of that was because my previous credits in Photography ended up not counting as anything but electives. The other part was I kept saying, "Hmmm...I wonder what this class would be like?"

So the question now is this: do I go on and get a bachelor's or a master's in art? Do I do as someone suggested ages ago and just "take the hell out of a bunch of workshops"? Ah hell, I don't know. I think I'll bask in this for a little while first.


He stood in the vastness of space. It took a bit of getting used to. The type of space he had wandered through the eons was populated by dying stars and food for Those he served. This space was different. Quasars pulsed, carrying information across the cosmos. Small suns collided into each other and coalesced into galaxies of ones and zeros. Most of the information was useless - food looking to procreate. Food looking for ways to prepare their own food. Food looking to reach out and enliven their pitiful little lives.

If that's what they wanted, then who was he to deny them? His tentacles adapted themselves easily to this new kind of space, reaching out and finding the information he needed and re-weaving it into something else. When he finished, he had a large portal that would be impossible for the food to miss, let alone resist. Little did they know every time they used the portal, it would bring Those he served a little closer to the physical realm.

As he looked at his work, he decided this space was infinitely more interesting than the ones he was used to walking. Nyarlathotep smiled and said, "Yes, food. Come forth and google."

I'm not entirely happy with the way this turned out. The big black shape on the right wasn't balanced out as much I hoped it would be on the left. But that's okay. I knew as I worked, this piece was cathartic but apparently I put more into it than I thought. I almost lost it several times as I tried to char the edges. I'd put out the flames, only to see them flare back up again a few seconds later. I may just go ahead, finish the job and scatter the ashes. 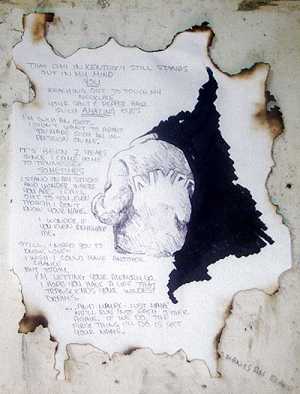 The text:
That day in Kentucky still stands
out in my mind
You
Reaching out to touch my necklace
Your salt and pepper hair
Such amazing eyes

I'm such an idiot.
I didn't want to admit
you made such an im-
pression on me.

It's been 2 years
since I came home
to Tennessee
Sometimes
I stand in my studio
and wonder where
you are. I call
out to you, even
thought I don't
even know your name.

I wonder if
you even remember
me.

Still, I need you to
know, love -
I wish I could have another
chance
But today,
I'm letting your memory go.
I hope you have a life that
transcends your wildest
dreams.

...and maybe, just maybe,
we'll run into each other
again. If we do, the
first thing I'll do is get
your name. 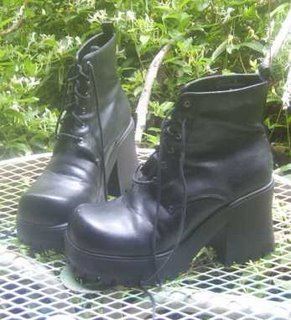 We are now returning to regular programming. Carry on.

Embryos, tentacles and the Butterfly Woman of Doom

I've got a few new ideas for paintings floating around in my head:

I was musing one day (Oh all right - I was off tripping through a pleasant daydream. You happy now?) and I saw this image in my mind. It's a pleasant enough landscape, complete with critters grazing in the field except...instead of ordinary cows, there are these creatures with three or four trunks/tentacles. They use trunks/tentacles to pull the grass and put it in their mouths. 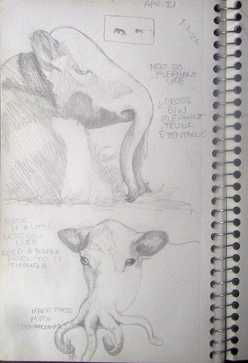 (I love the idea of tentacles...:::_insert maniacal laughter here_:::)

I'm not happy with these critters yet. One looks too much like an elephant and the other is still too bovine. I guess we'll see what comes out of it.


This one may be one of the next paintings I do. I was walking by the cherry tree and saw that it already has some fruit growing on it. It was a classic "what if" moment: what if, instead of this cherry, it were actually a critter growing in there? I combined properties of two different trees - I like the spent blooms of the cherry and the pollen of the pig hickory. The fruit itself needs to be translucent, with the embryo a little more...well, embryonic and indefinable. Yeah...I like that. 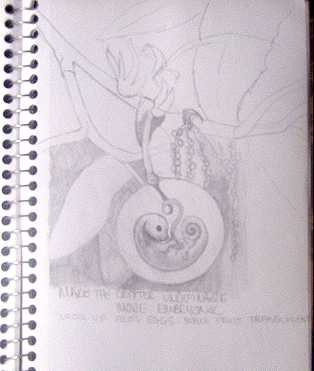 The last idea is still pretty vague but I can't get it out of my mind. It's a Butterfly Woman type being, with a dark twist.

Darkness looms on the horizon.
A storm approaches.
Lightning flashes.
I dance into the chaos.
A butterfly tossed about on the wind.

That's all I have of that at the moment. The image I see is a woman not one being tossed around, though. She is one who knows exactly what she's doing there. She may even have a mischievous smirk on her face - is she a Trickster? I don't know. Instead of the bright rainbow colors usually associated with Butterfly Woman, I see dark storm colors: grays, silvers, blues, violets. Heh. Sounds like somebody definitely worth knowing.

We won't talk about the tangent going on in my head right now involving butterflies and music reminiscent of 1950's era horror movies. Oh no we won't.

Let's get this thing going again

It's funny. On the twenty eighth, I started thinking how great it would be to get back to blogging. I couldn't wait to get back to the keyboard! Then the day finally arrived and I sat down to write...

Nothing. Nada. I was once again a living personification of that Far Side cartoon "Full Moon and Empty Head." As many times as that's happened, it's a wonder I haven't achieved Enlightenment several times over.

These last few weeks have been...Interesting, to say the least. I still don't have any idea, other than maybe a bigger than usual batch of hormones, of what brought on that particularly nasty little attack. I didn't tell anyone - except oh, the entire world through this blog - what was going on until one absolutely scary day.

Now, most of the time, death doesn't scare me. I live next to a cemetery. I collect bones I find in the woods. One of my favorite knick knacks is a little statue of a mischievous Reaper but I am in absolutely no hurry to see what's on the other side of the veil.

I was alone at home when I caught myself seriously thinking that death just might be a welcome relief, if only as means of ending the overwhelming pain I was in. The thought was there for only a few seconds but it was enough. After I pulled myself together as much as I could, I started making phone calls and sending e-mails, in the hopes of both not being alone any more than I had to be and having someone to bounce ideas off of. I never told them how bad it actually got but I think they figured it out. I don't usually marshall the forces like that. I get over it and go on.

As one person said, after I told her part of what had been going on with me, "It's like sumthen evil got aholt of you!" Truth be told, it's hard to argue with that assessment.

But enough about that. It's over and if I have to go through that again, it will be entirely too soon. So, in the spirit of going on, let's unfurl the Jolly Roger, wreak as much artful and surreal havoc as we can and take no prisoners. Come on, it'll be fun.

[Technorati tags: Daily Life, Diary]
Posted by Azra at 12:12 AM No comments: Links to this post