One thing learned:  no more playing with background color behind the text.  It comes through the feeds looking like a FOIA document.

Well, for good or ill, here are a few paintings... 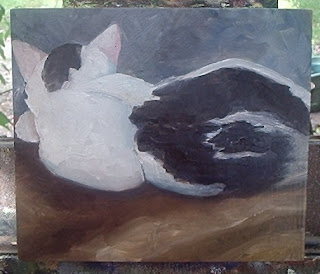 6" x 9"
Oil on birch
This was a quick, end of day study.  He took over my chair while I was painting and I couldn't resist.  I'll probably go in and clean up that lower right corner sometime but otherwise, I like it.

And here he is from the front: 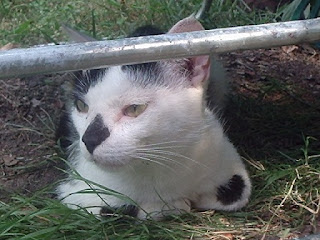 I love my Japanese rabbit.  This is a study I'll finish as soon as I figure out how to do the copper bits on the brushes.  That is what's stumping me at the moment - I know I just need to sit down and draw them but I guess I decided to take the hard road and you know, not draw them.
The shadows need something too - I'll tinker with them.  Maybe. 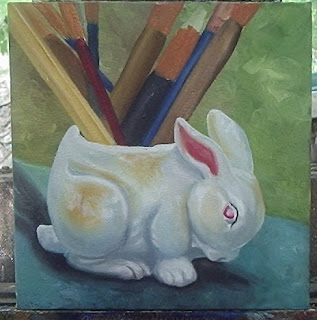 I was thinking of those old Silver Stream campers when I began this one.  This is a possible entry for this year's tomato festival.  That is if I can get it to come together a little better.  It's better than it was - I completely redid it this morning.  I got entirely too fiddly and overworked the hell out of it.  So reboot.

It has potential.  Somewhere in there. 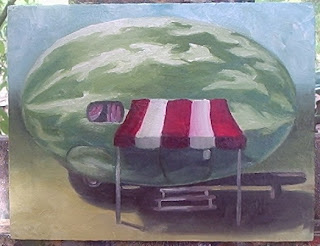 Neil Gaiman gave a great speech at the University of the Arts back in May.  In it, he talks about something I struggle with all the time, despite my brave declaration (rambling?) in the last post.

He said:
"The first problem of any kind of even limited success is the unshakable conviction that you are getting away with something, and that any moment now they will discover you. It’s Imposter Syndrome, something my wife Amanda christened the Fraud Police.
In my case, I was convinced that there would be a knock on the door, and a man with a clipboard (I don’t know why he carried a clipboard, in my head, but he did) would be there, to tell me it was all over, and they had caught up with me, and now I would have to go and get a real job, one that didn’t consist of making things up and writing them down, and reading books I wanted to read. And then I would go away quietly and get the kind of job where you don’t have to make things up any more."

Oh yes.  I know the Fraud Police well.  I call them the Art Police.  Sometimes, I see them as Men In Black - the weird, anachronistic ones rather than Tommy Lee Jones and Will Smith.  I would be there, standing in front of the easel when they drive up in their 1940's but brand new looking sedan.  They would get out of the car and in their strange, robotic voices, tell me they were on to me and I would have to put down the brush and stop Right This Minute  because I was perpetuating a major fraud on the world and if I didn't, then Dire Things may happen.  I may even have to ask people if they want fries with that.

I'd like to say that I always know how to deal with the Art Police.  I don't.  Sometimes, yes, I can turn the imagery on its head and invite the MIBs to sit down and have some tea.  I can question every Dire Thing they threaten me with and they stutter and stammer.  But just as often, I still get caught in the trap and their lies about the Dire Things, especially when those Dire Things seem to happen when things are starting to go well.

That's when I just have to remember - and sooner or later, I do - the Art Police don't have any power over me, unless I give it to them.  That goes for crazymakers and busybodies too.

Art isn't some elitist thing.  There is no "You must be this educated/talented/crazy" bar to stand next to in order to get on the ride.  All that is required is that you show up and do the work.  The ride takes care of itself.

Posted by Azra at 12:30 AM No comments: Links to this post

Now that I've got a decent, and more importantly - reliable, internet connection I don't have any excuse not to update these blogs, eh?  Art will be forthcoming, once I get used to the idea of being able to show off a bit again.

In the meantime, I'm going back to the original premise of this blog.  I started blogging way back when there was still a Geocities and I thought it inconceivable to fill up a whole *2 MG* of disk space.  I did it as a way to gain a bit of self - confidence.  I need a bit of that again.

I've also decided to be a little more out there in regards to my paganism.  I've always been a little reticent about talking about it, mainly because I haven't had the most consistent schooling.  I don't have any degrees or lineage in a tradition.  I certainly know I'm not the wisest person in the world.  You know what?  While I am always open to learning and growing, I not sure I care about all that anymore.

I may not know all the correspondences of every herb or stone listed somewhere in a book.  I could care less about planetary hours or if the moon is void of course.  I do know better but I can't help thinking every time I hear that the moon has suddenly left its orbit and going to go crashing into the earth or something.

What I do know is the moon and sun don't just go from East to West.  Over the course of a month or year, they trace a lemniscate in the sky - an infinity symbol.  I know there is a star that marks the seasons - it appears in a different "corner" of the moon - upper left, upper right, lower right and lower left.

I know the cycles of life.  I see Her in them, from the fresh maidenhood of spring plants to the lush bounty of the mother in summer.  I see the coming of the crone in the fall and the faceless one in the clean, cold sleep of winter.  I see it repeat every year.

I also see those cycles are also spirals.  Animals born, plants sprouted.  Mice and critters get eaten by the cats and the neighbor's cows and horses eat the plants.  The spiral moves onward and upward with those left behind.  New generations of animals born.  New seeds scattered.   Life moves on.

When it comes to magic, most times I use what is around me.  Five finger grass and yarrow are native plants here.  So is vervain, although I haven't found it yet.  Oak, hickory, cedar and black locust are abundant here.  I have a few herbs growing in the yard but mostly, I use what is wild.

So, yeah, I suppose I am fairly ignorant when it comes to many forms of paganism.  I never claimed to be a wise person anyway but this is what works for me.   Apparently They are satisfied with it, as well.  I suppose that is all that matters.
Posted by Azra at 9:46 PM No comments: Links to this post

I've been harvesting the seed from my arugula and purple kale plants.  I have to, especially after the last time.  I didn't know.  I just.  Didn't. Know.

I was looking forward to huge bowls of salad when I first planted them.  All those purple and green leaves.  Gourmands called them 'spicy,' but most folks I knew just said they were bitter.  My plans worked well - bowls and bowls of salads came out of my patch.  Arugula, kale, romaine.  Sweet lettuces too, to balance the bitterness: oak leaf, grand rapids, black seeded simpson.  I had them all.

When the arugula bloomed, I daydreamed about even more salads.  Same with the kale.  The plants were prolific, putting out thousands of seed and dispersing them before I even realized they were ready.  Again, I didn't think much about it.  I just thought I'd find plants in strange places for the next few months.

Then the people started disappearing all across northern Sumner County.  One or two at first then more.  It soon spread to southern Kentucky and beyond.  No one knew what to think about it.  The people were just...gone.

Someone soon noticed there was arugula growing in every place a person had disappeared.  A few plants by a front door.  Several hidden beneath the weeds by a hiking trail.  Later, people noticed purple kale growing in some of those places as well.

The authorities got curious and dug up some of the plants.  It was horrible.  Bits of synthetic fibers, rubber soles from shoes and tiny bone fragments were found tangled within the roots.  No one knows to this day how they managed to dig the them up without becoming a part of the debris.  Especially now that we know how the plants fed themselves.

You see, somehow what they were getting out of the ground wasn't enough anymore.  They needed more.  Somehow, both the arugula and kale developed facile roots.  They were certainly strong  enough to grab any passing animal, including humans, and drag them beneath the loose soil and feed on at their leisure.  It was no surprise when several horrified people in a local park caught them on film, on the move to their next feeding grounds.

After that, the extermination program began.  The plants were attacked with extreme menace whenever they were found.  New plantings of arugula and kale were banned.  It was a hard fight and we almost lost.  Like I said, the arugula is very prolific.  The kale isn't far behind.

So I've found some of the plants trying to hide in my garden.  I trapped them before they could feed on anything.  In my mind, turnabout is fair play and I'll eat as many of them as I can find...and keep them from spreading more seed throughout the county.

That's why I have to stay on top of harvest.
Posted by Azra at 2:07 PM No comments: Links to this post