I finished a couple of paintings (finally!! I thought I would working on the junebug until long after I was dead) and forgot to post them the other day. 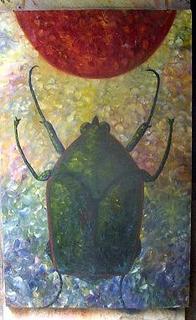 Well, I don't think the junebug came out exactly like I had in mind, which probably doesn't matter much anyway since I really only had a vague idea of how it should go. I usually like to plan out my ideas a little better and try to work out the bugs (pun intended) beforehand. This one was different. I said to myself, "I WANT TO PAINT!!! I'll work out the comp as I go..."

I'm not entirely sure it was successful. I've taken the disc out and put it back. I've had that middle set of legs in at least six different positions. Even now, I look at it and say, "I could add something to the top of the painting to finish out that circle and I'm not entirely sure I like those back legs like that. Could I have had some rays streaming out from the disc? What about that (*)#@@$@! middle set of legs?!"

I'm going to let it rest for a while and look at it with fresh eyes - that'll be the true test. 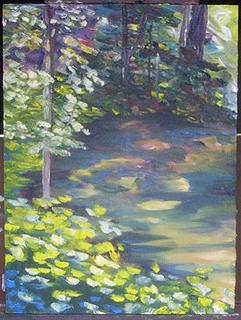 I worked on this piece over a day or two when I needed a break from the junebug. It's the view out the door of the barn/studio and it's another one of those where I just wanted to paint it without too much thought going into it. Landscapes are not one of my strongpoints (although it could be argued that if one judged by the examples I've put into this blog, painting isn't one of them either) and I wanted to see what would come out of it if I just let go and let the brush do what it wanted.
Posted by Azra at 9:56 PM