I feel like I was spoiled when it came to working on the painting of Khnum. The research was fairly easy with lots of scholarly info out there. Bast, on the other hand, is not so easy. (I think there's a joke in there somewhere.)

That's not to say that She's not popular. Oh no - just the opposite. The problem is that not much of the info for Bast is very scholarly and most of it is just reprinted (read: stolen) from other sources - which reprinted (stole) it from somewhere else. Then there is the one scholarly source, Per-Bast, which pretty much says that everything we know about Her is historically wrong. What exactly is She? Well, the webmaster can't say, except that we'll have to figure that part out ourselves.

Oh yes. That was a lot of help.


So I've spent these last few weeks trying to get a feel for Her, trying to get to know Her. For the longest time, it felt like a very one-sided deal - with me doing all the work. 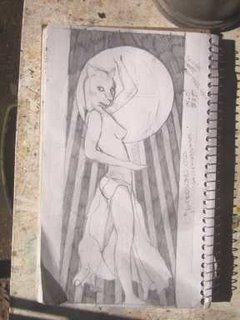 Here's a sketch that came out of the frustration. I thought about trying to unite the two perceptions of Her, protector and sexy but in the end it just looked like a character from a cheesy super-hero cartoon. After a few of these, I finally had to tell Her, "That's it. I have tried and tried but I've spent too long on this. It's not working. I have to move on to another project. Sometimes it's just not meant to be." 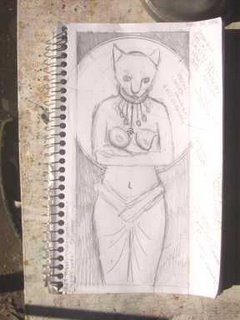 Apparently, my quitting is all it took. The next night, I finally got this sketch on paper. Herself, just standing there, with Her arms crossed and the sun (representative of Her being the protector/avenger of Ra) behind Her. 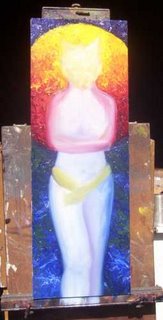 So now the painting is finally going. It's an odd one: 18.5"h x 8.0"w. That red paint gave Her an interesting look when it got dragged in as I was blocking the figure, didn't it?