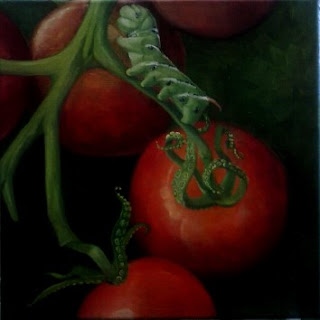 The paintings for the Tomato Art Fest are done!  Yay!  All that's left is to put the info on the back of them (title, medium, contact info, etc.) and delivering them tomorrow.  I do wish I hadn't obsessed so much on the carnival theme.  I would have gotten more paintings finished.  C'est la vie.

I hope the caterpillar painting's photo is okay - it was a bitch to photograph. Then again, I didn't have the greatest equipment for the job. 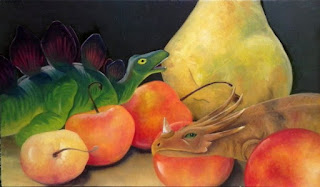 I also went ahead and got another painting started.  This one has been floating around my head for about four years and I guess it decided it was time to come into the world.  It pretty much put itself on the board when it came to sketch it out and block in the colors (or rather, block in *some* colors.)

I accidentally got an oak board when I bought 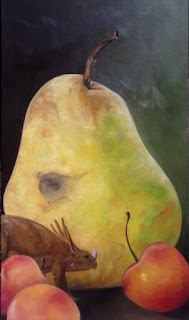 supplies a while back.  I wasn't sure about it when I framed and gessoed it.  The grain is much different to what I'm used to - it is very deep, compared to poplar, and textural.  I want to play with it now with dry brush and building the colors with the base color in the grain and just dragging the other colors on top of that grain.

I want to advance my skills and damn it, I'm going to do it!  My paintings need a bit more...what's the word?  Sophistication.  Keep the whimsy and odd but advance the techniques.

My re-ment came on Thursday!  I ordered some loaves of bread and ceramic plates to put them on.  They're so tiny, yet detailed!  The plates are about an inch square and the loaves are about as long.  They even have the cuts in them so they could 'expand' as they 'baked.'

I see why so many people get hooked on collecting the stuff!  I want a few more things, lettuce being in the mix, of course.

This means I need to properly set up the shrine.  Altars, I'm used  to having but this is a new thing for me.  For one, I'm not used to having a deity take so much interest in me.  I've had a few that asked me to do things for them but not *this.*  Then again, there haven't been that many I would even consider setting up a shrine for.  I mean, there hasn't been any I really considered cultivating a relationship with.

This is new alright.  I've resisted the whole deity thing from the beginning.  When I first became Pagan, way back in :::coughcoughmumblemumblecough,::: everyone was insistent on two things: everyone had to become clergy as soon as possible and everyone needed patron deities.

I never was very good at following the crowd or the rules but look at me now...and I can't figure out way a god of chaos is interested in me.  :-D
Posted by Azra at 11:24 PM