Well, my adventures with oil paint are continuing. Here's the latest version of the June bug: 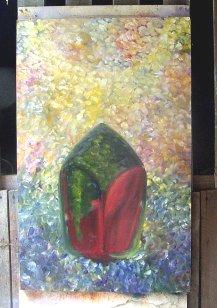 Yeah, I know - I chose a weird place to stop painting on the June bug's wing covers and it looks extremely strange with just the body and no legs or eyes. Truth is, it was four in the afternoon, I had worked on this puppy almost all day (I did take an hour to eat breakfast around 9:30 and another break from 11 - 1.) I forgot to eat anything else so I was hungry and tired. There was also good potential for general crankiness so when the green mixture ran out, I judged it to be a good time to quit.

I'm still not happy with the blue parts on the background. It has thrown me into several fits! I think this is the third incarnation that background has had today. My original idea was to have yellow on top with red on the bottom, so the red would vibrate off the green in the body. There were also lavendar and green underneath as complements. Well, it didn't work. It was just too plain and...icky. (How do you like that high falutin' Artist Talk? I went to college for that.)

When that didn't work, I decided to play. The yellow parts worked out rather well, although you can't really tell that from this photo. I double loaded the brush and I really like the undertones of blue, red, green and lavendar in there. I tried to stay with the idea of having red on the bottom but it kept coming out as pink - or worse, "mud." In the end, I kept a little bit of red down there but the blue worked much better, although I'm still not happy about that lower left hand corner. My brushstrokes kept changing on me because I had to bend down to get to that corner. They look huge to me, compared to the rest of the board. There's a few other problems here and there (like that big red spot just to the right of the June bug's wing) but it'll have to wait.