Cleaning up the cemetery

No art got done today but I'm still beat. I spent a good deal of the day in the cemetery (and what girl wouldn't love that? What? Oh, just me?) picking up after last night's storms. Several big, dead tree limbs blew out of the top of the old oak tree in the back. I knew the wind was nasty last night but I had proof when I found one piece of a limb about a foot long. It had the appearance of trying to stab one of the graves - I guess I pulled three or four inches out of the ground. I ended up keeping most of the wood because it was beautiful - a creamy off white color with lots of bug tracks and "worm holes" in it. I don't what the heck I'm going to do with it but I couldn't let it go to waste. 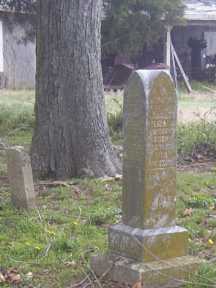 I noticed today there were several sunken places that are unmarked graves. One gravestone is broken into about four pieces and several of the graves have some flowers on them that are so old, I can't tell what color they used to be. I also found a small piece of marble from a gravestone with a small amount of old red candlewax hidden beneath it, just enough to anchor a candle to the stone. I didn't sense any bad intentions with it, just some extraordinarily stupid judgment.

For some reason, I also found a bingo card pen with plenty of ink still in it. Is there something going on in that cemetery I don't know about? What kind of bingo prizes would the dead be interested in anyway? New satin pillows? A night at a luxurious bone bath and night Spa?

Getting back on track here, I decided something while I was out in the cemetery. I don't know why it's taken me so long to come to it. I don't have any family buried there. In fact, I don't have a clue who any of the people are, except for one guy who got the original grant for this land just after the civil war. No one's been buried here in many, many years and there is only a very occasional visitor in the warmer months. Yes, there is a guy who has family buried there who mows the cemetery every summer but this little spot of land is aching for some attention.

I will fix what I can and mark the location of graves. I'll take out the old, faded flowers and clean out that brush pile. I will care.

...and I'll try not to steal any more bingo pens.