I'm an Addams! (Or Nosferatu, I'm not sure which.)

I hope this is still up: archeology April Fool's spoof: Archeology of the Undead

(Have I succeeded in making the Rocky Top Brigade regret opening its ranks to just any ol' Tennessee blogger yet? Just kidding, y'all.)

Lately, I've started collecting old photos. Not just any old photos but just whatever catches my eye, which means more than likely they've got something fairly odd about them. So imagine my delight when my mom brought over a box full of photos that had belonged to my great aunt.

Now, I don't know if it's a Southern thing or just my own weird family but there were a lot of photos of bodies in their caskets. There were just as many photos of people sitting on grave markers as if it were family reunion day at the park (hmmm...come to think of it...it could as well have been, for all I know.) 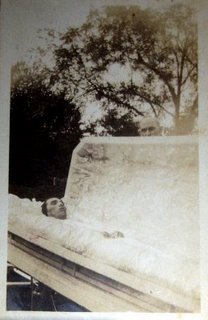 Case in point: this photo that was given to my great, great grandmother Nike. (That's pronounced like "Mike" - it's short for Monica, which in turn was pronounced "Mo-NIGH-ca.") No one knows who the person is in the casket - or the strange guy standing behind it. I just know when I saw it, I immediately said, "Uncle Fester!!" Then again, he does sort of look like the creature from the 1922 movie "Nosferatu," doesn't he?

I have my own memories of being at the funeral home and someone taking photos of the body. Mostly, the memories are of my own grandfather, who died when I was seven and we still run across the photos of that every now and then. What I can't figure out is why in the world would anyone want to remember their loved ones like this.

Huh. Maybe I should ramble about strange memories like this more often. The more I ramble, the more I'm figuring out just why I'm as warped as I am.

(edited to add an extra "great")