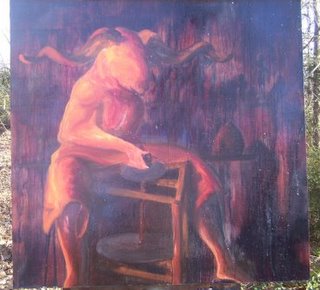 This is what happens when you try to photograph a semi-wet board on a sunny day: 99.995% of the blue isn't actually in the painting. It's the sky reflecting off the glaze in the background. That's sort of cool, in a bizarre kind of way.

Now I just need to pull the "people-esque" shapes out of the background a little more and tone Khnum Himself way down before the detail goes in (I think I need to work in a few more colors too.) Some of the strange texture in the background is where I had the paint run down the board to represent Khnum's water aspects. Now it just looks like part of the wall.

There for a while, I had some serious doubts about this thing. I threatened several times a day to just take this painting right off the easel and let Him think about how He was treating me it sit until I was good and ready to work on it again. Maybe we're finally coming to an understanding.

The darkness is the perfect compliment, and shelter for, his creative fire.

I'd say it's coming along beautifully.