So, I’ve done a painting of Khnum and worked on a painting of Bast (it still has a few problems but it’s getting there. Veeeeerrrrryyyyyy slowly. She and I evidently have issues.) Now I want to do one of Set. So, I sat down and tried a few different “poses” and they all sucked. In sheer frustration, I did “Mona Set” and “Set on a Tea Break.” 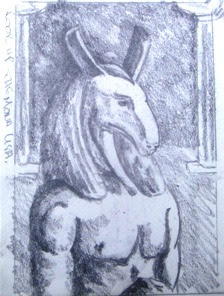 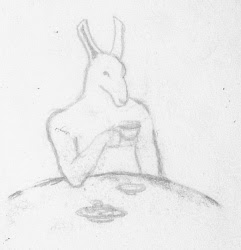 Strange thing – once these were done, my eyes burned for the rest of the day. That was just my sunblock running into my eyes, right?


I also decided it’s time to get back to drawing hoomans again and I couldn’t wait to post this one, even though it’s not finished. I didn’t know just how out of practice I would be, so I decided to start with someone without a preconceived appearance. He is a character from a popular series of books. Click on it for a better view. 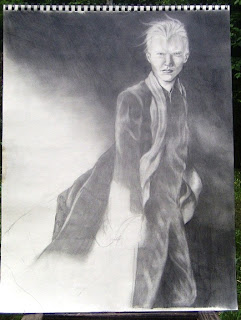 So- who do you think it is?

I don’t know where – if anywhere – this idea is going. It all started with this sculpture. (Scroll down a hair to see it.) 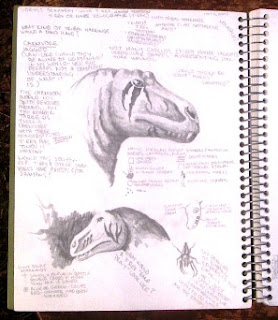 (To quote Austin Powers: “Blimey! Nerd Alert!”)
So I got to thinking: if the dinos didn’t go extinct, what kind of “civilization” would they have? Would it be tribal? Would they have shamans or priests? Would they even have a spiritual way – including sacred numbers and things like that? Would those numbers be dependent on how many “fingers” the dino had (Tyrannids with two, troodon with three, etc.)?

I started playing with markings, sort of like Plains Indians used. The blurry things under the upper dino’s head are actual markings used on horses.

I want to play with “local” dinos, so these two are all wrong. These are T-Rexes, found west of the sea that was here way back when. We had Albertosaurs.

Oh yeah - the thing in the right hand corner is supposed to be a jumping spider but it didn’t like sitting for its portrait. This is a result of an idle thought while I played with my dinos: I know what they look like in the movies but what would be like if they were standing right in front of me? This came from that night’s dream. These little guys scattered as soon as they realized I was looking at them.

I am so going to paint this once I get their faces to look right.

Right. I think that’s enough posting for tonight. 'Night, y'all.
Posted by Azra at 12:00 AM

Labels: Dino society and tribal markings, drawing, How NOT to portray Egyptian gods, sketching, What happens when your inner self is six

I love it when you show us your sketchbook, makes me feel like I'm sitting next to you with a warm cup of tea.

Love the pinto pony dinosaurs and the itchy spider.

I don't think I've seen you do a human quite so realistically before-is it that slimey blond boy from the Potter series? I like the slight frame of bushes and easel :)

Glad you're back in my virtual world.