The life and times of an artist

The east-west flight corridor to Fort Campbell passes right overhead and traffic has picked up in the last three days. I wonder if that means anything or if they're just transporting the copters to other bases? 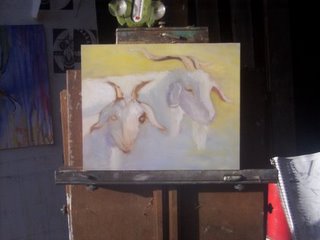 Between giving the new cat some attention (it only took all summer and half the autumn to get him to trust me enough to let me pet him and now he thinks he's entitled to it) and keeping said cat from trying to beat up Toby, somehow I managed to get some work done today. After I decided to take a break from this painting, I thought I would upload it, now that most of the colors are blocked in. I just noticed what looks like a big yellow streak under that one goat's beard - that will have to go!

This a small oil painting - 8"x10" - I'm doing for of my aunt and uncle Christmas gift. They have a huge herd of goats but these two caught my eye on Thanksgiving day.

I've got two more paintings and three drawings to do. I wanted to take a longer break from this one (I felt like I was just frippin' around the board instead of doing much of anything) and start at least one of the others today. They had other ideas.

I put the darn thing up on the easel and as I started to put the ground on it, it started bouncing. Normally, that isn't a problem when you're using canvas but these are masonite. They aren't supposed to bounce.

Turns out, the glue I used (Elmer's wood glue) to attach the boards to their supports isn't holding. Of course, it sticks to the wood supports but not the gessoed board, which is strange because I've never had that to happen before. One thing maybe be the temperature affecting it. It's been in the twenties at night and various temps during the day in there. Eh, maybe I should've just sprung for the Gorilla Glue like I had originally thought. I hate being interrupted once I get going on a roll.

Oh yeah - the drawings are for three of the (almost) sacrifices from Thanksgiving. All three of them saw me doing a quick sketch of a cactus my aunt had in her kitchen window and said, "Draw a rose next!!" Now they all want one for Christmas.

I hope my lip didn't curl up too much when I heard the word "rose" come out of their mouths. I can't stand the sight of a rose on paper or canvas. You see, years ago, I was a member of the Hendersonville Art Council. There was this one older woman there who seemed to do nothing but watercolor paintings of roses but yet, she had this attitude as if she were better than Rembrandt himself. One day, as I picked up a colored pencil drawing that had been entered in the member show, this woman felt she just had to say something - anything - about my work. So here I was, standing there with a 18"x24" frame in my hands and she finally says, "I like your puppy dog." It took all the reserve I had not to bop her over the head with my "puppy dog" but somehow I managed to reply, "Thank you...but it's a wolf."
Posted by Azra at 3:44 PM

Hey Azra! Just looked over your blog and want to say that I love your art journal! Good to see you on the EDM group.
Linda who is also from Tennessee (we're kind of a rarity)

Hey...I just discovered from the Complimenting Complimenter that we share the same birthday: woo-hoo!

(and quite coincidentally, I just used the word "chiaroscuro" in today's blogpost...)